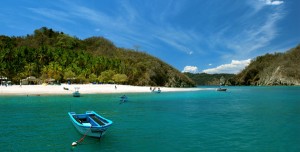 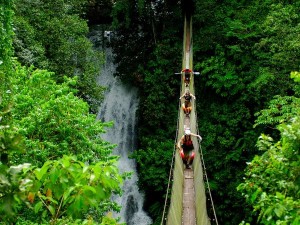 Costa Rica is a small country that encompasses just 0.03% of the world’s land mass. With over 500,000 plant and animal species, Costa Rica is one of the planets most biologically dense countries. According to Costa Rica’s National Biodiversity Institute (INBio), the biodiversity in Costa Rica represents close to 4% of the total species on Earth.

There are a few things that are important to know about Costa Rica before visiting. The following Costa Rica travel tips will help you better understand the country.

It rains year round in Costa Rica, and visitors should be sure to bring a light rain jacket or poncho. December through April are generally considered the dry season, and the rainy (or green) season starts in May. The busiest travel times in Costa Rica are during Christmas and New Years, as well as the week leading up to Easter Sunday, which is known as Semana Santa. For these weeks, hotels are often fully booked well in advance.

Unlike other Central American countries, clean tap water can generally be found throughout the country and in most tourist destinations. Additionally, most visitors find that they are free to enjoy the local food without serious repercussions on their stomachs.

Costa Rica’s unit of currency is the colon, which hovers between 500 – 550 colones/ $1 USD. U.S. dollars are widely accepted, provided the bill is not too large ($50 and $100 bills are rarely accepted) and in good condition. Hotels and tours generally list their prices in dollars. Compared to the rest of the Central America, prices in Costa Rica are relatively high, due in large part to the country’s high standard of living. Typical Costa Rican food and produce is quite inexpensive, while imported products are priced similarly to U.S. prices. A typical Costa Rican breakfast and lunch will cost around 1500 – 2000 colones ($3-4).

Road conditions throughout the country are quite variable. With the tropical climate and mountainous terrain, many roads are difficult to maintain, and many have never been paved. Relatively short distances can take many hours due to poor road conditions or traffic, and some roads are simply inaccessible during the rainy season when rivers swell. It is always a good idea to check with the locals about current road conditions before planning a day trip or taking off in your rental car. These tips can make or break your day.

Costa Rica is in Central America. It is bordered by both the Pacific Ocean and Caribbean Sea, with Panama to the south and Nicaragua to the north. The country’s total area is 51,100 sq km (19,730 sq mi), slightly smaller than the U.S. state of West Virginia. Costa Rica’s terrain varies between coastal plains and rugged mountains. Three mountain ranges run through the country and there are over 100 volcanic cones, several of which are major volcanoes. The highest point is Cerro Chirripo, which rises to 3,810 meters (12,500 ft) in the Chirripo National Park.

The Continental Divide runs through the country’s interior and weather patterns from both the Pacific and Caribbean sweep across the divide’s verdant slopes. Costa Rica’s northernmost regions tend to be more flat and arid and have dry tropical forest, while increased humidity and precipitation creates lush jungles in the south. The country’s rainiest months, termed the “green season,” start in May and run until early December. The dry season typically lasts from December through April. Weather along the Pacific coast tends to follow these patterns. The Caribbean coast, however, is much less predictable and can receive rain throughout the year.

Much of Costa Rica’s biological diversity can be attributed to its location between two continents, as well as its numerous microclimates, which vary by elevation amid the country’s mountainous and volcanic landscapes.

Having a well-grounded and realistic understanding about Costa Rica’s weather patterns will help travelers plan their trip and avoid unpleasant surprises.

Costa Rican society is rooted in family, education, health. Ticos and Ticas (male and female Costa Ricans, respectively) have a sustained commitment to healthy personal relationships and stewardship of the natural environment. This emphasis on creating symbiotic relationships with the environment and tourism, particularly in the last 40 years has set a profound example, and it has allowed a fascinating model of development to take root.

Costa Rica has been a peaceful democracy without a military for more than 60 years. Costa Rica is often referred to as the Switzerland of Central America that offers free education through the 11th grade as well as health care for all citizens. Costa Rica enjoys a high standard of living with the highest regional literacy rate (96%) and an average life expectancy of 78 years. Costa Rica’s long-term vision and investment in the health of its people has also paid off with many foreign businesses drawn to its qualified work force, stability, and proximity to the United States.

In addition to generous social policies, Costa Rica has enacted progressive conservation efforts that have drastically reversed the deforestation that ravaged its land for decades. The country’s system of national parks and reserves protects approximately 25% of the country, a percentage that sits among the highest in the world.

Living up to environmental virtues and sustainable development remains a constant battle throughout the country, whether due to lucrative contract offers, corrupt politics, or illegal poaching and logging. Nevertheless, Costa Rica has largely resisted opportunities to exploit its vast natural resources for valued commodities, despite having a high density of precious metals in the South Pacific, oil along the Pacific Coast, and rare hardwoods in the rainforest. Instead, Costa Rica has opted for an ethic of sustainable development and a commitment to develop renewable energy. Already, Costa Rica is on track to become the first carbon-neutral country, with 99% of the country’s energy needs meet through a combination of geothermal, hydroelectric, and wind power.

Tours and Activities in Costa Rica

Costa Rica offers many exciting ways to immerse yourself in its natural elements. It is the consummate destination for exploring ecosystems and connecting with a peaceful culture. Whether discovering fascinating species with a friendly Costa Rican guide, zipping across the rainforest canopy, or relaxing in a volcano-heated hot spring, there are a variety of tours and activities to engage travelers of all types.

View all posts by renuka →