You are here: Home › Advice › Latin American Driving Habits
By Gringo Guru on in Advice 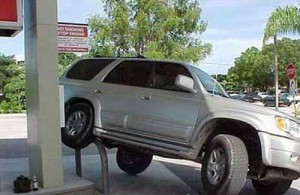 Mexican and Central American drivers make driving in the cities a bit frustrating for visitors from above the border.

Obedience to basic traffic laws seems to depend upon if a policeman is watching or not OR if you are a Gringo (haha, really).

For example, if you stop for a red light the impatient driver behind you may honk his horn and inch his vehicle uncomfortably close to your rear bumper, he may even tap it.

All the same, if you drive through the light and receive an infraction Señor Impatient is not going to pay the fine for you.

Turn signals take on a different meaning in Mexico.

Often a left turn signal on the vehicle in front of you is a sign letting you know it is safe to pass. Flashing headlights while passing lets oncoming cars know what you are doing.

Additionally, when cars traveling the opposite direction flash their headlights as they pass you it is a warning that the police or military are up ahead.

This procedure is especially common in Costa Rica where the police are famous for their radar traps.

The unwritten law of driving in Central America and Mexico is don’t drive at night.

Most of the problems that travelers encounter take place on dark desolate evenings.

As a general rule, get up early in the morning and drive until dusk.

Although, it is very easy to drive into the night when a more preferential town is only one or two hours further.

It is likely that you will break the night driving rule in order to find a good place to stay.

There have been groups of people that have driven to Honduras in five days from California, they take turns driving and go continuously.

For those adventurers that dare to be different, you could theoretically drive from the US-Mexican border to Costa Rica in seven days, (these people are definitely coffee aficionados).

You shouldn’t do it, but if for some reason you MUST do it then here are the details.

Challenging road conditions worsen at night, occasionally Mexican drivers do not use headlights claiming that it is saving them gasoline.

Additionally, animals and potholes in the roadway make driving even more dangerous at night. When driving at night, decrease your speed and use high-beam lights, respectful of other drivers – please!

In many instances you will notice that nighttime drivers use their high-beams upon approaching your vehicle.

Many times after you signal them to switch to a lower beam they don’t because the high-beams are the only functional lights on their vehicles. When this happens focus your eyes on the white lines at the side of the road until they have passed.

Also be aware that there is no highway lighting, thus when you add all the nighttime variables together -animals, potholes, high-beams, torrential downpours, the occasional bandit or military blitz – well, your odds are better at the roulette table in Las Vegas.

Finding petrol for your vehicle during late evening hours is not a problem.

Most gas stations are open all night along the coastal route and your only logistical problem is finding your way in the dark, though it is possible. In some areas along the mountain passes, Michoacan and Puerto Vallarta especially, the fog can be dense.

If this is the case, locate a large truck and follow it.

The yellow and orange running lights on the truck will act as a guide through the fog.

Please proceed with caution when driving in these extremely dangerous conditions.